Riding for a Good Cause: The Goodwill Journey

October 18, 2012
One thing that caught the eye at the Gulf Bike Week 2012 Expo was, the dirty odd looking bike being showcased at The Chapter Dubai’s stall. Upon inquiry, the story behind the dirty bike was told, by the owner himself. The bike belongs to Wissam-al-Jayyousi, the founder of ‘Goodwill Journeys’, a charity organization whose target is raising awareness about the suffering and hardships that Palestinians endure daily. As a Palestinian himself, this cause is very dear to his heart.

Wissam was present at Gulf Bike Week Expo to promote awareness about ‘Goodwill Journeys’ and his recent trip the ‘Silk Road Journey’ that he undertook using the bike, in order to raise awareness and funds for the PCRF and carry the message of Palestine. He travelled from Dubai to Singapore, passing through countries like Pakistan and Afghanistan, in a specially equipped Harley Davidson. The touring model of Harley Davidson which Wissam used to undertake the journey is fully equipped for life on the road. Electronic cruise control, 80-watt Advanced Audio System by Harman-Kardon with passenger sound system, vented removable fairing lowers and adjustable fairing wind deflectors, luggage liners and intercom are all standard equipment.

Wissam isn’t new to riding for a cause. He has been doing that all of his life. In 2010, his charity Goodwill Journeys collaborated with a charity in the UK, to make possible a road trip to London. The trip was aimed at raising funds and awareness for the education of children with special needs in Palestine. The trip was of 40,000kms and lasted 60 days, during which he rode through 36 different Middle Eastern and European countries. In May 2012, he collaborated with the Palestine Children’s Relief Fund (PCRF) to undertake the journey to Singapore, the same one he is promoting at the Expo. The journey’s aim was to raise funds for the construction of a cancer ward at a Hospital at Beit Jala, Palestine.

The Goodwill Journey is committed to raising a million dirham for the PCRF and to help in raising awareness about the plight of children in Palestine. According to Wissam, more support from people is needed in order to raise that money. There should be more awareness about the condition of children in Palestine and according to him they do need as much help as they can get. This is why; soon, Wissam is going to once again ride off in to the sunset, yet another time – this time the journey taking him from Dubai to Glasgow. 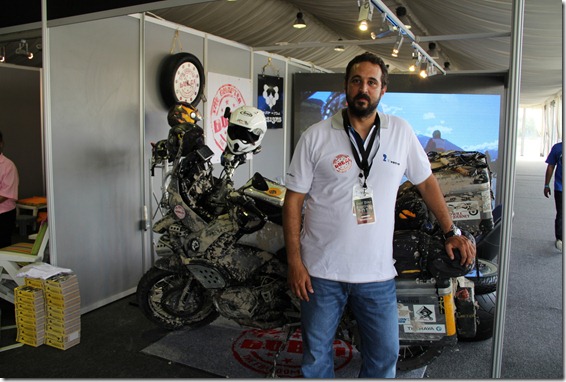